Visiting Auschwitz is a difficult experience. Something suddenly squeezes in your chest, your hands tremble, your eyes moisten, and shivers appear on your back.

Everyone perceives this place in a different way, and personally, I do not know how it will affect you. I am sure of one thing-you will leave there full of reflection and thoughtfulness. A trip to Auschwitz will change you and your outlook on life. And it will certainly be a valuable change.

If you are planning to visit Auschwitz, this post will prepare you for the experience.

I personally went there on the recommendation of friends. On the occasion that I flew to Krakow for the weekend, I found it a perfect opportunity. To avoid standing in lines and buying tickets, I planned everything in advance. I booked a private shuttle from the airport to my hotel at https://jtp.group/en/vip-transfers-from-krakow-airport-to-the-city-centre/ and then, using the Krakow Direct offer, I bought a guided tour of Auschwitz.

A bit of history

The camp existed between 1940-1945. Initially it was supposed to hold only political and opposition prisoners, but eventually the camp became a place of extermination for over a million people.

The camp consisted of three parts:

No one knows exactly how many people died at Auschwitz-Birkenau. The Nazis destroyed camp documents, and the people who died in Auschwitz II-Birkenau were not registered and were not given numbers.

Various sources and reports put the number between 2 and 5 million people, including 1.1 million Jews and 150 thousand Polish people.

Prisoners died in the gas chambers suffocated by Zyklon B gas.

They were told they were only going to the bathhouse-the gas chambers were equipped with showers. Once everyone was inside, the SS bolted the door and let the gas in through the holes in the ceiling. How horrible! Some prisoners, often after interrogation and torture, were executed at the so-called “death wall.

Prisoners who were not sent to the gas chambers did grueling labor in the camp.

Many died of exhaustion and starvation. The prisoners’ food rations were far too small in comparison with demand.

They examined ways to sterilize prisoners, infected people with diseases, and studied the effects of extreme starvation. Prisoners arrived at the camp by train, often in freight cars. After arrival, they underwent selection. All of them had their personal belongings taken away and became the property of the Third Reich. New prisoners received a camp number tattooed on their bodies. From then on, the number replaced the name and surname. 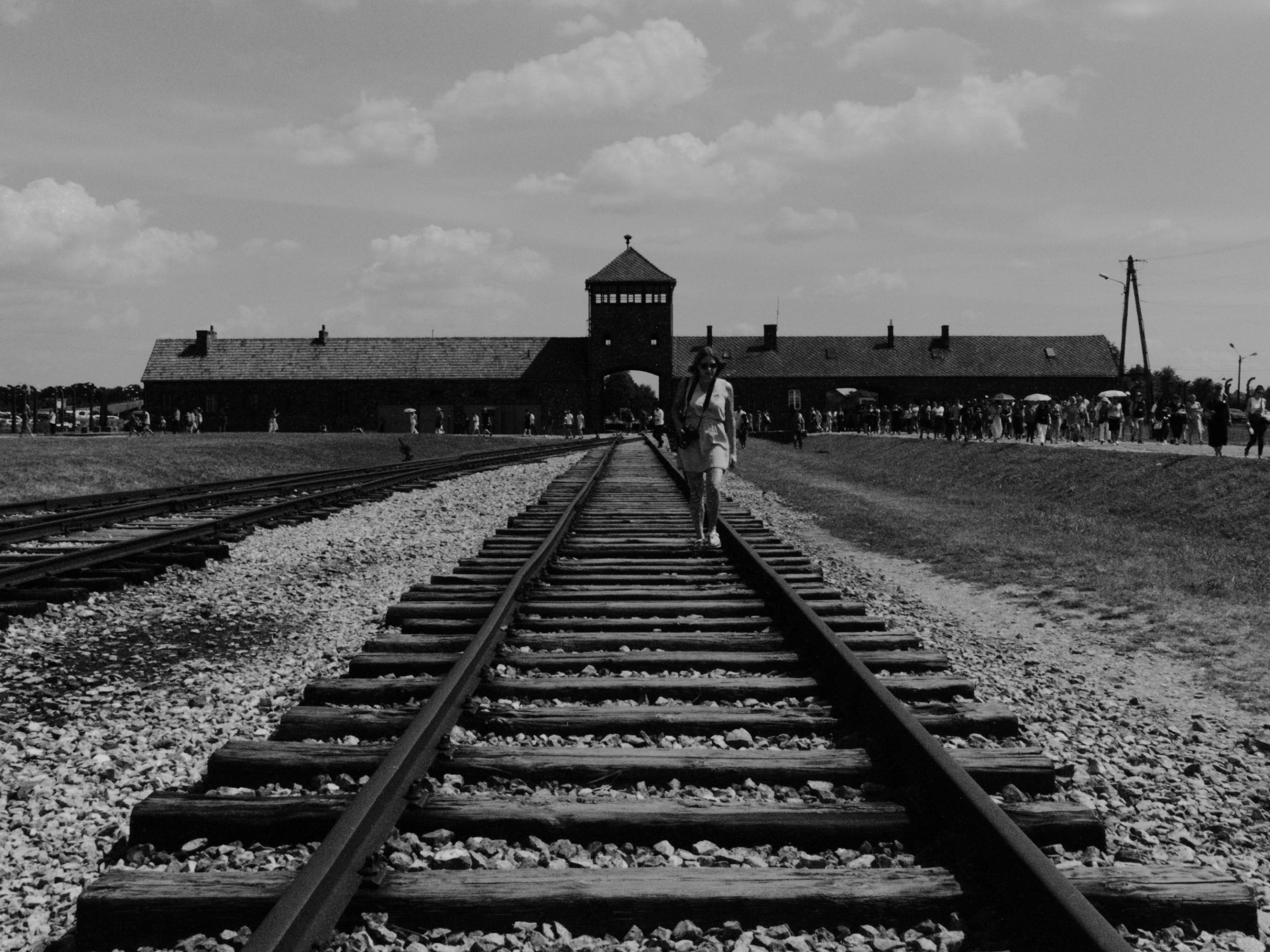 We started the tour by walking through the famous main camp gate with the inscription Arbeit macht frei – work makes free. It was through this gate that prisoners set out for days of several hours of grueling labor.

Further on you will see the camp barracks, in which today you will find thematic exhibitions. In each of them you will learn a different part of the history of the camp, but also more about the life of prisoners. You will see personal belongings left behind by prisoners: pots, dentures, shaving brushes, hair…

There are also pictures of a small percentage of prisoners, and the names of all the people who died in Auschwitz are written in a huge book.

I was most impressed by the wall where prisoners were executed, located between blocks 10 and 11 – where interrogations took place and where prisoners were tortured. You will be able to enter the gas chamber and see nail marks on its walls and imagine people in panic seeking escape from the burning, poisonous gas.

The most moving part of the tour was the exhibit of children’s drawings found on the camp grounds after liberation. It shocked me more than walking through a completely empty gas chamber….

After visiting the main camp, head to Auschwitz II-Birkenau. This is where train transports from all over Europe were brought. This is where the largest number of prisoners lived, this is where the largest crematorium complexes were built. This is a huge area to see, here you will see barracks and conditions in which prisoners lived, you will see the ruins of huge crematoria. Paradoxically, however, this place is less overwhelming for visitors than Auschwitz I, although historically it is the site of the greatest tragedies.

Much depends on what type of tour interests you more and how much you already know about the subject. The guided tour made a huge impression on me, I learned a lot, and much of that information I will never forget. I relived this tour for the next few days.

If you’re visiting Auschwitz for the first time and you don’t know much about its history and you know that you don’t have the patience to read the information boards – opt for a guided tour. You will get much more out of the tour than you would on your own. I really recommend tours with KrakowDirect. Everything professionally prepared. You can check it here: https://krakowdirect.com/krakow-airport-krakow-transfer/.

It is true that visiting Auschwitz is not a pleasant experience. You will not go to a party that night. The only thing you may feel like is spending a lonely evening under a blanket. However, it will certainly be one you won’t forget.

Everyone should visit such a place at least once in their life.

Learn the facts, realize the enormity of the tragedy and what racial and other hatred of others can lead to. In this way, I hope we will be able to avoid the repetition of such a terrible history. I believe that after visiting such a place everyone will think twice before saying or writing hateful words towards a person of another nationality or religion.

It happened, and therefore it can happen again! That everyone can be happy about every free day and peace. And to travel all the time! Of course, I think that I will be following the website: https://krakow.wiki/krakow-airport/ all the time, to visit this beautiful city again.