This is another city and another story from about Nazi war. Rotterdam, the largest industrial target in the Netherlands and of major strategic importance to the Germans, was to be bombed. What was the reason of destroying this city? Citizens thought that  Netherlands will remain neutral – just like during World War I.

Rotterdam was about to become the third aim on the list of cities that experienced the German doctrine of “the scourged earth“. First two were Guernica in Spain [1937] and Warsaw [1939] in Poland. It meant that it had to vanish, to be razed. Why, again, innocent people had to die during this bombardment? Let’s trace events of May 1940. 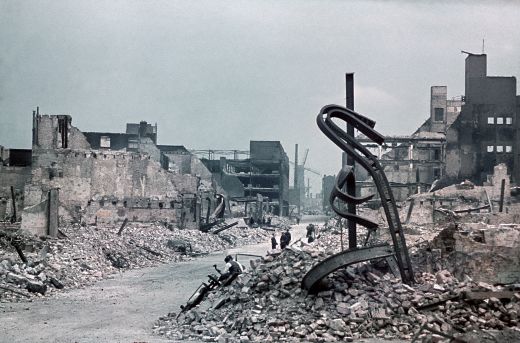 It’s been simply strategic move. The bridges across river Maas had to  be conquered to make sure that the majority of the armed forces will have easy access to the heart of the Netherlands. The aim of the bombardment was to break Dutch resistance and force the Dutch to surrender. Around 90 aeroplanes, of the Heinkel He 11 type has attacked the city. It is estimated that 900 people died and Almost 80,000 people lost their homes. After bombs came soldiers on parachutes to fight with surprised Dutch and take strategic points near the bank of the Maas river.

It was nothing else but strategic bombing. This military strategy  is distinct from both close air support of ground forces and tactical air power. Of course, the aims were military objects, bases, railway, harbors. But another important factor was bombing of non-military targets could significantly reduce enemy industrial capacity and production. And, of course, destroying enemy’s morale.

It proved the force of the attackers, was a reason to be proud. Other European countries which suffered because of bombing were Italy, France, Poland and England. First bombed cities were Warsaw, Rotterdam, Belgrade, and London. Experts still argue whether bombardment of Rotterdam was necessary. I can answer this question. No. Single targets would not change the curse of the war. But one single death can change the life of those who survived for ever. I know that during the war nobody cares that’s why we should never ever let the war happen again. Please, remember that many cities almost disappeared, leaving only ruins, thousands of dead bodies and sorrow.